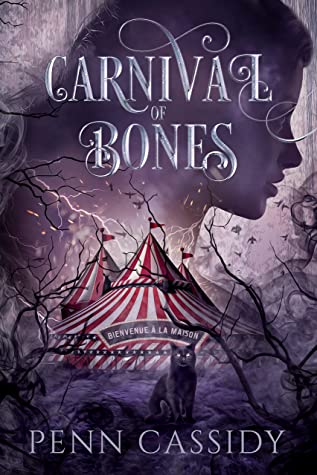 Carnival of Bones by Penn Cassidy

I’m not even going to attempt to rewrite a synopsis for this book. The one that it already has is so wonderful and lyrical and I feel that going into the story having read only that is important and adds a certain element to it as well.

This story opens with us meeting a blood covered woman, Moria Laveau, as she tries to piece together why she’s covered in blood and standing in her bedroom. Terror abounds as things just continue to spin in a wave of confusion as she tries to find her abusive husband for fear that she will incur his wrath due to her having displeased him some how. She is terrified to leave the townhouse, even though Mardi Gras is happening, because this would also mean that his fists would meet her flesh, but she finds herself with little choice. She must seek help, and find out what’s going on. Fast forward to her finding herself in the middle of the Bayou. She stumbles upon a strange carnival set up in the swamp, and seemingly empty. However, it is anything but. What she will learn here will change the trajectory of her world forever. Can she survive it?

So, I wasn’t planning on writing a synopsis, but ended up giving you a brief run down anyway. I was intrigued by the Goodreads synopsis of this story as it illustrates a whimsical yet dark tale wrapped in a mystery that I was just dying to unravel. One thing I absolutely loved about this was how accurate to Voodoo (apologies for the generic term used, I didn’t want to misspell any of the others). It didn’t just run off the stereotypical practices or figures, such as Marie Laveau, who, while mentioned, is not the focal point of this story. Of course Papa Legba is mentioned, which I adored, but I learned about another deity that I was unaware of, Kalfou. I adored that this story taught me even more things about this practice that I was unaware of and I absolutely loved it.

The story itself, not a whole lot really happened to be honest. The whole crux of the story was “What happened to Moria Laveau?” and I had two scenarios picked from the opening scene, one of which was correct and as the story progressed, my reading time became more about waiting for Moria to catch on rather than enjoying the ride with her. This isn’t a deal breaker by any means, but I feel like it took the sense of urgency out of the story for me.

The characters were well written and I really enjoyed all of them. Especially the cat, he was wonderful and I loved this little quirky addition. I feel that Cassidy wrote the abusive husband so well, that even though we never experienced his abuse of Moria first hand, it was told through memories or her speaking about it, I felt the oppression and the isolation. I feel like this really lends proof to how talented Cassidy is in her craft because being able to translate something without having the reader living it with the character can be quite hard, yet she did it masterfully.

The world building was wonderful and I really felt like I was in the bayou with Moria. I could hear the crickets, feel the humidity, and smell the drying swamp water on her nightgown. The visuals were so rich and I feel like this was probably my favourite thing about this story to be honest. The sights, the sounds, the smells, ugh, I am living for it. I also loved the lore in this story, and the explanation behind everything. I don’t want to go into details because I don’t want to give anything away, but everything was explained beautifully and I absolutely loved the lore.

This did have a hint of romance to it, but I feel like it was a little off kilter for the story that was being told. I’m not mad at it by any means, I quite enjoyed the build up….and the release (if you catch my drift) when it came to certain characters, and I feel like it was important to show Moria taking back her own body in a way. This is such a different story to any others that I have read that it’s hard to pinpoint what didn’t work for me.

All in all, this was an interesting read, and I’m glad that I picked it up. Even though it wasn’t as amazing as I had hoped, it was still a super solid read. There are questions left unanswered, and there will be a book two, which let’s be honest, I’m going to buy. I’m invested in the characters and where they go from here. And I want to see more of Kalfou…