Hi All! Welcome to my stop on the Last Atlantian Blog Tour!! Within you’ll find the synopsis, my review, places to purchase as well as a giveaway that is open Internationally!! So don’t forget to enter that, and please enjoy your stay 🙂 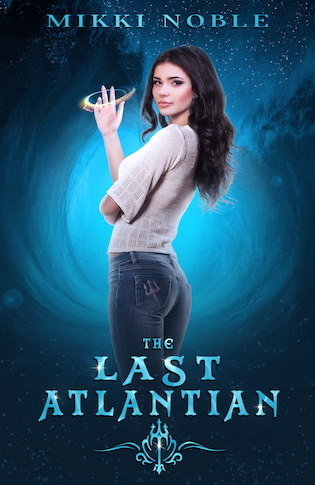 What Spencer doesn’t know is why. Why is all this happening to her? Why does she have the power to turn people into gold all of a sudden. Who is she really?

And why is this cute guy calling her the last Atlantian?

It’s Spencer’s birthday today. Her seventeenth birthday to be exact, and unfortunately, she has to work. Her day was already shaping up to be not the greatest, but when a creepy man accosts her demanding her phone number, she accidentally turns him into gold. As if this wasn’t freaky enough, now she has these strange men in gold robes chasing her, and a cute guy – who swears he’s a friend – telling her she’s the last Atlantian and imploring her to let him help her. All she wanted was to spend her birthday doing whatever she wanted with those she loved, but now that has all changed, her life will never be the same after today.

The premise of this book interested me greatly. I’ve always had a deep down fascination with the Atlantis legend, so this one seemed right up my alley. The story was fast paced, and I absolutely flew through the book in the matter of pretty much a day of ACTUAL reading. The action starts from the get go, while this was good, I also had some issues with it. We are introduced to Spencer and her best friend Cia, we are then told about two different men (I think…), and it became incredibly hard in the first chapter odd to tell these two characters apart, at first I thought it was one guy, but I’m pretty sure it was two…I think… so this irked me a little bit as being the opening chapter of a book, having your reader confused isn’t the greatest thing, however, even though I’m still questioning whether or not there was one guy or two, I got over it (mostly).

Spencer’s character came across as very juvenile to me, I understand that she has just turned seventeen, but she sounded like a very young seventeen, and her memory issue when it came to names began to get annoying after a while, I understand that this was meant to be a character quirk but it just didn’t seem to gel with the story so much for me. Eli was a nice character, and I enjoyed the characters of the old lady and Kevin, I actually felt that these two characters were the most well rounded ones out of the bunch. I also enjoyed Vincent, I would have liked to have seen more of him.

The plot was well thought out and decently executed, though I did feel that the reader was being told more than shown which made the narration come across as a little monotonous to me, there wasn’t really a flow to the writing. As said above though, the pacing was excellent and the story absolutely flew by! There were a couple of errors and sentence structure problems, but that’s nothing that couldn’t be fixed by another round of editing.

I really enjoyed the story itself, and to be honest, I was kind of hoping this would continue on to be a series as I feel there is more to the story of Spencer and her being the last Atlantian that can be explored, and I’m interested to know what happened next! I can cross my fingers and hope really hard I suppose 😉

If you like a lightish young adult fantasy that touches on the mythology of Atlantis, give this one a go!

Add it to your Goodreads TBR and purchase below!

As far back as she can remember, Mikki was creating characters and stories in her head. It wasn’t until fate brushed the tip of its wings over her eyes that she began to see that writing was what she was born to do. She loves animals, reading, everything supernatural related, and enjoys spending her free time on social media whenever she can.

Enter for your chance to win a $20 Amazon gift card!