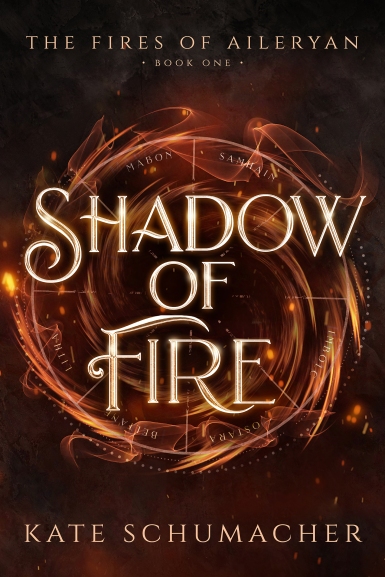 Shadow of Fire by Kate Schumacher

I received a copy of this book from Social Book Tours in conjunction with their organised book tour. All thoughts are my own.

Ever since The Rift was created, Fire Magic has been outlawed and punishable by death in Merawuld. So when Ash can no longer hide the fact that she is a Fire Caster, she believes her life is forfeit. It soon turns out that there are far more nefarious dealings in play and there are different factions fighting over her capture. Some wish to kill her, some wish to control her, and some wish to help her. As the Bone Mother’s winter is fast approaching, The Fae Princess is determined to help Ash learn to control her powers while battling against corrupt, power hungry leaders who want nothing but war. Her hope rests on the shoulders of a human man who wishes for peace. Everything is riding on Ash learning to control her fire magic, lest the world fall into war and ruin, spelling doom for all.

This was a fantastic opening to what is promising to be an amazing series. I’ll admit, in the beginning, there was so much going on, actually, throughout the whole book, there’s a lot going on. This instalment serves to set up the world building and political hierarchy for the rest of the series, while simultaneously introducing us to the major players and their stories and goals. So initially I wasn’t entirely sure how I felt about it, but once I began to understand everything and wrap my head around all the different characters, I started to really enjoy the story that is forming. It’s going to be a big story I believe, there are a lot of players and a lot of different threads to follow, yet they all somehow intertwine which I thought was great.

In the beginning, I was super invested in Ash’s story and was mostly wanting to stick with her and Jarlath. So I didn’t like that the story jumped into other characters leaving me hanging on what was going on with Ash and Jarl, I felt like I just didn’t care about anyone else at that point. But then! Then I became invested in the thread that follows the Fae Princess and her chance encounters with Tharion; I’ll admit, since finishing the story, I am mostly here for their story now. Don’t get me wrong, I’m still keen to see what happens with Ash and Jarlath because they’re great characters too, but I became so endeared and invested in the Fae Princess and the son who is a disappointment to his father in so many ways. And don’t get me started on Fox. Initially I believed there were too many characters flying around with too many stories for me to enjoy any of them, but I’ve become invested in so many of them, and I just didn’t think that was going to happen! I can’t stop thinking about the stable hand that Tharion talks to either…I want to say his name is Elan? Yeah, he’s been living rent free in my head since I finished the book and I just need to know what’s going to happen with his and his sister’s story. So yeah, you could say I’m invested. The characters are all so well written, they’re all so distinctly different from one another with so much depth and realness to them. There’s also some character growth that happens throughout this story, which I always love. I love when characters and relationships get to grow and evolve organically, it makes the story more enjoyable for me while still lending a sense of believability to everything.

The world, my god the world. This world is huge. It is so rich in it’s diversity and when you tie in the hierarchy and the political back stabbing and just everything, it’s big. There is a lot that needs to be set up and explained and illustrated so bare in mind that there’s not so much info dumping happening, but there’s a lot of information to take in and wrap your head around. So while it might seem daunting initially, stick with it and take in as much as you can because what ends up forming is such a gorgeously detailed world that is so rich in it’s lore and the different races and religions. We visit so many different places throughout the story and I loved the descriptions of every single one. I also love that we get a full picture of everything without the descriptions being overly involved and over the top.

I’m not normally too keen on political heavy stories, whatever genre they may be, but I find myself super invested in what’s going to happen between the warring factions in this story. There’s so many people involved that I’ve begun to care about and I just need to know that things are going to turn out okay for them, I’ll take knowing that most of them are okay if I have to. I just know that I’m probably going to have my heart ripped out and stomped on as the series progresses, but I still need to know what’s going to happen. I am invested.

All in all, I felt that this was an absolutely fantastic start to a promising new fantasy series. It has many threads that will need to be tied together and they’ve already started crossing over and twining into each other which I feel really lends to Schumacher’s ability in her craft. The characters and world are rich and so well developed with room to evolve and grow as the story progresses and the writing had a decent flow to it. Though it felt like it took me a while to get through this one, I feel that was more because there was so much to take in and this book is a lot of setting up the world and the stories, I feel that the pacing in book two will be much better as so many foundations have been laid in this opening story. If you like a fantasy with rich world building, fabulous lore, deep characters and relationships and stories that really drive the story forward, give this one a go, you won’t be disappointed. And I implore you, if initially you are finding that there’s a lot going on, stick with it, because I promise, once you close that back cover, you’ll be hooked.

*= Read book. Repeat may earn commission on purchases made through these links.