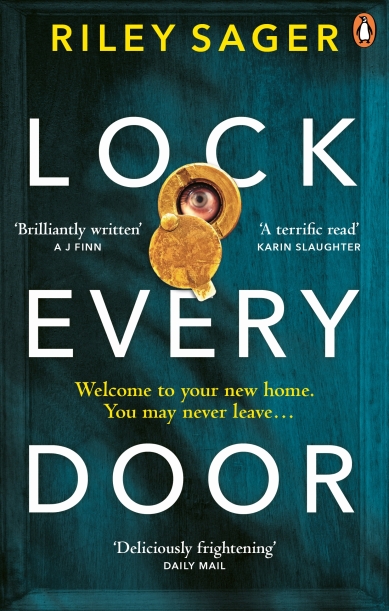 Lock Every Door by Riley Sager

Jules is in a bad spot, she’s been made redundant, recently broken up with her boyfriend, and has been living on her best friend’s couch since. She’s lost and feels that she’ll never manage to get her life back on track. Then she sees an advert for an apartment sitter, she figures why not? It’ll be a roof over her head and a job all in one! What she doesn’t realise is that the apartment is in the Bartholomew, one of the most esteemed buildings in Manhattan and home to the rich and famous. When she attends the interview, she thinks it all sounds too good to be true, then there are the rules, of which include: No spending the night away from the apartment, and strictly no visitors at all. Once Jules is in the apartment, she soon befriends fellow apartment sitter Ingrid, who quickly confides that there seems to be more than meets the eye when it comes to the building and it’s inhabitants. Jules thinks nothing of it until the next day when Ingrid is gone. Now it’s up to Jules to find out what really happened to Ingrid, along the way, she discovers that Ingrid is not the first to go missing. What follows is a race against the clock, Jules has to find out what’s going on before she too vanishes without a trace…

I went into this book after reading Home Before Dark. I love a good horror story and I’ll admit, I was more excited about Home Before Dark than this one, but let me tell you, Lock Every Door blew my freaking socks off! I don’t know if it’s because I went into it not quite knowing what to expect, or whether it was because I went into it with lower expectations? Either way, this book is up there as one of my top reads for the year, I’m recommending it to all my bookish friends.

The story, initially, seemed pretty cut and dry. A down on her luck woman, just looking for the chance to turn things around, and look, we do get that. The whole thing is to live in this apartment, rent free for three months and get paid $12,000. So it’s a pretty awesome chance to turn things around. And it’s not just any old dumpy apartment, these apartments are luxury and fully furnished, besides the bizarre rules, which after explanation don’t seem so bizarre after all. The thing is, the story turns into so much more than that. It’s told through alternating chapters, one is told from Jules perspective in the present – after the events that happen at the Bartholomew, and the other is told from Jules perspective in the week or so leading up to the present. I feel like the dual timelines in worked really well for this story as it gave us snippets of things without giving anything away, yet added another dimension to the story and had me on edge waiting for things to go wrong, which I feel worked brilliantly for it. I found myself questioning was there paranormal happenings in this story, much the same as I did with Home Before Dark, you’re not really sure whether it’s paranormal or something else, and I really enjoy that about Sager’s books. The mystery really kept me guessing right up until the big reveal, I had absolutely NO idea that this was the reason behind the disappearances and I feel that this made it more shocking as well. I would not have picked it. The story was also written in such a way that I could not put it down. I needed to know what was going to happen next and to see if we were going to get any hints at what was going on. I did pick one thing, but I feel like it wasn’t meant to be a surprise, and honestly I didn’t know HOW it was involved, just that it must have been.

The characters were really well written as well. I really felt for Jules and I loved that she was just a normal person who had hit a rough patch and was just looking for a chance to change it and make her life better. I feel like it was more believable because it could happen to anyone, at any point your life can take a nose dive and you could be left with nothing, relying on those closest to you to help out. I also really felt her isolation, her parents were both dead, and her sister was never found, so all she had was Chloe – her best friend. I really loved the character of the doorman, I thought he was such a wonderful character and I wish I knew him in real life. The characters we meet who reside in the building were all so well written and larger than life, I feel like Sager did a fantastic job of really embodying the personality of the famous. There was such a noticeable difference between the apartment sitters and those who lived there normally, it really showed a social divide which I thought was executed perfectly. The privilege of the rich and all that, it was a recurring theme through this story and I feel like it was demonstrated great.

Once again, Sager did a great job of really building an atmosphere you could feel with this story, and the underlying knowledge that something wasn’t right was pretty much there from the get go. It really added a foreboding feeling to the story and it worked brilliantly. I have since purchased some more of Sager’s work and I feel like this is an author that I’ll be following quite closely as so far I’ve really enjoyed the two books that I have read. I’ve also recommended them to people basically straight after finishing them. If you’re looking for a creepy read, with strong atmosphere, real characters with depth, and horror of a different kind, give Sager a look. I’m sure you won’t be disappointed.

*= Read book. Repeat may earn commission on purchases made through these links.