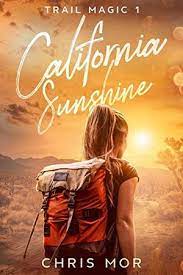 I received a copy of this book from the author in exchange for an honest review.

After a terrible star to the year, Belle is taking a chance and following a dream. She’s going to hike 2,664 miles along the PCT and give herself the time and space she needs to clear her head and figure out what she wants from life. Until on first morning at the start of the trail, she meets Nova; good looking, kind, smiley sunshine, Nova, who asks her to join him and his two friends – Bats and Grinder – on the trail. She knows that she shouldn’t, but how can she say no? Bats is the strong silent type, while Grinder is like an angry storm cloud that Belle would rather avoid than hike a five month long trail with, but maybe some company along the way won’t be such a bad thing after all…after all, it’s only five months, hiking alone with three hot guys…what could go wrong?

This story is told mostly from Belle’s point of view, with a smattering of chapters thrown in from the guys points of view throughout. I felt that this was a very character driven story, which I love, and it did not disappoint. The setting for the story is the Pacific Crest Trail which can be done in sections or straight through, our story follows those who are planning a straight through hike, all the way to Canada. We first meet Belle when she’s a complete mess after she’s left her boyfriend, she throws herself into planning for the hike of a lifetime, even though she was meant to be going with said boyfriend, she’s determined to still do it, and on her own. What I loved is that there’s not this huge section where she’s preparing every little thing, instead we get a brief snippet then before we know it, she’s at the beginning of the trail. I loved this because the story didn’t get weighed down with all the minute details, yet still gave enough that we had the full picture. It stuck with the important things and I felt that this really worked for the story.

I absolutely adored the characters. I really loved Belle’s character from the moment we meet her. She’s heartbroken, but she’s determined and I felt that she was such a strong character who was just trying her best to work through a crappy hand she’d been dealt and move on. She is a very real character and I felt like I was walking beside her along the trail. She’s someone I’d want to be friends with, honestly. I love that she’s a science nerd. I loved the characters of the guys as well. They had such distinct personalities and voices and I loved how different they all were to each other. Nova gave me mad Labrador vibes with his sunshine personality and his smiles, while Bats was the silent type, yet became sweet and endearing in a heart beat. Grinder took me a little bit more to warm up to, but it’s because he was putting up this prickly exterior which I felt really worked for the story. I loved that there was more to this than meets the eye when it came to each character and their reason for taking on this hike. The relationships between all of the characters were so well written and felt really organic, which I loved. There was no instalove here, it was four people getting to know each other in such an intimate setting, was there initial attraction? Of course, but once again, it felt so real and I am here for it! I loved how the relationships developed over the story naturally, and I especially love the character growth, especially that of Grinder. I just really loved these characters.

The setting for the story was so wonderfully described without getting bogged down in unnecessary details, it felt like I was walking the trail right along side Belle and Co. There’s a particularly touching scene that is my favourite so far that involves the guys and some rocks (IYKNK). The trek is not finished in this opening instalment, and I’m really glad about it. I love that it looks like we’ll get to enjoy the story told against the backdrop of the trail for a good chunk of it. I’m so excited for the next instalment in this series. I think one thing that really drew me to this book was because the setting reminded me of another story I read a couple of years ago, it’s called Petra’s Ghost by C.S. O’Cinneide, don’t get me wrong, the stories are completely different, but that story is also told against the back drop of a hiking trail – The Camino de Santiago – and I feel like this was a big part of what piqued my interest for this story. I really enjoyed the hiking setting and this book did not disappoint.

All in all, this is a fantastic story of four people coming together over their need to heal and work out what they really want out of life, while they grow into someone new. There is a budding romance told against the stunning backdrop of the PCT, and characters that really step right off the page. I highly recommend this book and I cannot wait to continue the series (I’m really hoping the guys catch up with Bryce, that would be a cherry on top of an amazing story).