This post is part of a virtual book tour organized by Goddess Fish Promotions. Jayce Carter will be awarding a $25 Amazon or B/N GC to a randomly drawn winner via rafflecopter during the tour. Click on the tour banner to see the other stops on the tour. 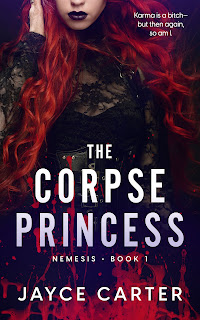 Karma is a bitch—but then again, so am I.

Ten years ago, a group of men murdered my mother and thought they had killed me. I’ve spent every day since planning revenge against the man behind the attack—my father. As the head of a powerful crime family, he won’t be an easy target, but nothing matters more than making him pay for what he’s done.

Now, I return in disguise, only to end up on the radar of the Quad—the four most dangerous men in the city…men I’ve been desperately in love with since I was a teen. I have no idea if they were in on the plan to have me killed, but I can’t stop myself from craving their taste, their bodies and their rough, domineering touches. Even though I know the risks, I keep falling deeper into our twisted relationship.

My plan is simple—find and get rid of the people who carried out the attack, kill my father…and don’t fall in love with the men who might have betrayed me.

This world already killed me once—let it try again.

Good lord, as it turned out, banging four guys took a lot out of a girl. I should have expected it, but pornography made it all look so easy.

They didn’t show the next day, the aches, the sore muscles, the hickeys or marks from bites.

Then again, maybe that was like romance novels not showing how a year down the road, the leading man had stopped washing his ass. People like to see the good, the exciting, and forget the rest, the reality and the aftermath.

A good night’s sleep had helped me put myself back together after the huge mistake of having sex with the Quad.

I’d known it hadn’t been smart, but by the end, it had become clear just how stupid the choice had been. I’d wanted to feel something and had ended up overwhelmed by it all.

Be careful what you wish for.

It hadn’t really happened until the end, until that last orgasm had cracked me wide open, when I’d leaned against Rune, when I’d lifted my head to see Bray and Dane staring at me, and I’d wanted….

I hadn’t dared allow myself to take that thought to its conclusion, to consider what I wanted, because it wasn’t possible.

For so many reasons.

I doubted they wanted anything real. I couldn’t trust them, and I’d likely be dead soon anyway. All of it meant this was cursed from the start, and that terrifying moment of desire had made me shut down…hard. I’d welcomed that coldness again and let it consume me, had allowed it to hide anything I felt beneath miles of solid ice. 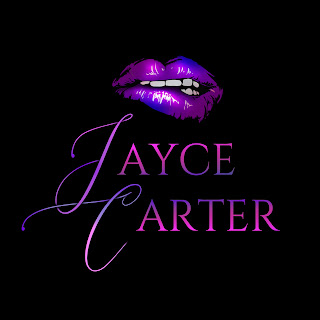 Jayce Carter lives in Southern California with her husband and two spawns. She originally wanted to take over the world but realized that would require wearing pants. This led her to choosing writing, a completely pants-free occupation. She has a fear of heights yet rock climbs for fun and enjoys making up excuses for not going out and socializing.