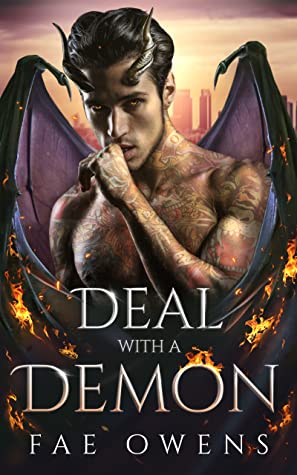 Deal with a Demon by Fae Owens

I received a copy of this book from the author in exchange for an honest review, all thoughts and opinions hereafter are my own.

Delilah had a plan. Sneak in, seduce the rich guy, get the money, get out and have her and her family setup and good to go. What she wasn’t counting on was running into one of King’s generals, or the deal that he offered. Zeke is at the mercy of King, and has been for a long time. He can no longer handle being a pawn in King’s games, so when he catches Delilah – a succubus – attempting to burglarise his domain, he jumps at the chance to finally be free, with her help. The problem is, Delilah doesn’t know if she can trust Zeke, she is also having trouble trusting herself when it comes to him. Is he telling her the truth? Because if he’s not, it’s not just her life that will be forfeit, it will be her family’s as well.

I was approached by the author to read and review this story, and when I read the synopsis I jumped at the chance because I’m a sucker for a good Urban Fantasy/Paranormal Romance and I don’t read them as much as I used to.

This story started out a little convoluted for me, there’s a lot going on and a lot to try and wrap your head around in the very beginning. We’re given a brief idea of what the world is like, but not a whole lot of information is given to really flesh it out. I did find it a little hard to get into the groove of the story at the start, but that soon fell away as I became immersed in the characters and got to know them. As the story progressed, I developed a better picture on what was going on world wise and it sat well with me, though I’d have loved a little bit more of a backstory to really give me that full world set up. I have to admit, I loved that there was no info dumping, info dumping is a way to really confuse the reader and make me not enjoy a story if there’s just too much I’m trying to take in at once. I feel like the world can definitely be expanded on as the series progresses and that it will work really well for the series as a whole. This story is told through alternating points of view between Delilah and Zeke which worked well for the story because you got to see things from both sides, though when it comes to the relationship side of things, sometimes knowing what both parties are thinking takes away the anxiety about “will they get together” etc. and while we had a clear view into both main characters heads throughout this story, I still found that I didn’t know how things were truly going to end up which is great.

The plot begins with Delilah who is a succubus heading into Las Vegas to pull a job, but once she meets Zeke everything changes drastically. The story became incredibly character driven, which I love because to me the characters are the most important thing IN a story. The plot was definitely there and shows great promise for continuation, but it was secondary to the characters and I felt that it was the driving force to move the relationships forward, which worked great.

The characters themselves are all incredibly well written. They were all three dimensional, each with their own fleshed out personalities and flaws which make them come across as even more real, which for me, is incredibly important. The characters are all incredibly complex and I look forward to getting to know them more. I did have one of the character’s secret worked out from the very beginning, but that did not take away from the story at all. I actually loved that Owens added this little tidbit into her character pool to contrast the rest of the lineup. I was really happy when the reveal happened, because I was hoping that it would be true. The relationships between all of the players were well written and I feel like they were incredibly well thought out. It’s not just a ragtag group of characters thrown together, there’s more depth to the relationships than that and it really helped endear them all to me and care about what happened to them as the story progressed. Owens does a fantastic job of writing villains too, I just wanted to point that out. Villains can be a hard thing to write because trying to convey how powerful and terrible someone is can be difficult, but Owens succeeded in this quite well. I had moments of wondering whether the good guys would prevail because at times it seemed as though all hope was lost.

This story is one that I see as a series setup, we’ve been thoroughly introduced to the characters, and have gone through peril with them, we’ve had a taste of the world and the greater plan that this crew is working towards and I am looking forward to seeing the world expand and to see more of the characters and get to know them even better. This series definitely holds a lot of promise and this was a strong opening to achieve that. I have questions that I want answers to, so you can be sure that I’ll be continuing on with this series.

All in all this was a great start to a promising series. This is my first read by Owens, but it will not be my last. I’m looking forward to seeing how the overarching storyline progresses!