Welcome to the BOOK BLITZ for Annie Anderson’s Queen of Fate & Fire, book number 6 in her Rogue Ethereal series. Read on for a synopsis, goodreads link, purchase links, an author bio, as well as an INTERNATIONAL GIVEAWAY which gives you the chance to win one of THREE $25 Amazon Gift Cards! 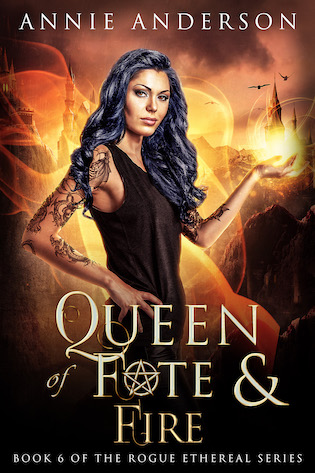 A crown I don’t want. A bargain I can’t take back. A life I refuse to sacrifice.

After four hundred years on my own, one would think I’d be able to walk away and never look back. I’d done it a thousand times before with nary an inkling of guilt. But with my brand new predicament, there is no way I can turn down the offered bargain—not if I want everyone I love to stay alive.

Now, all I have to do is trek through the very realm I nearly died to keep sealed. Sure. Because there’s no way that could go wrong.

They say the first year of marriage was the hardest. If the blade to my new husband’s throat was any indication, they—whoever they were—would be right.

But this wasn’t my husband—not really.

Sure, this was Alistair’s body, and sure, he was probably hidden somewhere, crouched low in the recesses of his own mind, but the man looking through Alistair’s eyes, and wearing Alistair’s skin was not my husband. He was some kind of dark Fae, and he’d taken over.

“What have you done with him? Where is he?” I’d meant it to come out as commanding, but I didn’t quite hit the mark. I was a frantic mess at best, and the monster wearing my husband’s skin knew it.

This was what I got for coming to Faerie. Literally every single person with any lick of sense said demons could get possessed here. They said it was too risky. They said Alistair was in danger by following me to this place.

Of course not. I smiled, nodded, and did whatever the fuck I wanted to anyway, and look where we were. Look at what happened to the man I loved.

I should have known something was off the moment I saw Alistair fall in the gorge. We’d been trying to keep the Unseelie Fae back. We were trying to stop Verena and whatever cracked plot she was trying to carry out. I’d thought we’d succeeded. Peering into the strikingly blue eyes of Alistair’s hijacked face, I’d say we missed one.

I saw the lie cross his face before he opened his mouth. No. Not today, buddy.

“Think very carefully about what you say next.”I could practically feel my molars cracking from how hard I was clenching my jaw, and if my blade happened to nick his neck, well, it was just a sign that I meant business.

And yeah, this was far too close to home for me. Not just that it was Alistair—not that it was the man I loved being used in such a fashion. No, this was Maria all over again. This was everything I’d buried bubbling up to the surface.

And if Alistair’s face wavered a little due to some unshed tears, well, I’d say I’d earned them.

Not-Alistair took that moment to pounce, bringing the sword from his scabbard up and knocking my blade away from his neck.

I scrambled back a step, before our swords clashed—or rather my athame went from dagger-sized to short-sword sized after I pressed the rune on the handle, and I attacked. My fencing skills were weak at best, but no-rules swordplay? Aidan had once said I was a natural.

Still, this guy was parrying every single strike like he was humoring me rather than fighting for his life.

“I am not your enemy,” Not-Alistair’s mouth said, but his voice was no longer my husband’s. It had a burr of something else I couldn’t place. A smokiness that had never been there before—not even when he’d been phased.

“Really? You got a funny way of showing it.” My frustration bubbled up inside my chest as I slashed and parried. I couldn’t say why I didn’t want to use the power that roiled beneath my skin, but I didn’t.

I could kill him.

I could hurt him.

But I didn’t want to.

Annie Anderson is a military wife and United States Air Force veteran. Originally from Dallas, Texas, she is a southern girl at heart, but has lived all over the US and abroad. As soon as the military stops moving her family around, she’ll settle on a state, but for now she enjoys being a nomad with her husband, two daughters, an old man of a dog, and a young pup that makes life… interesting.