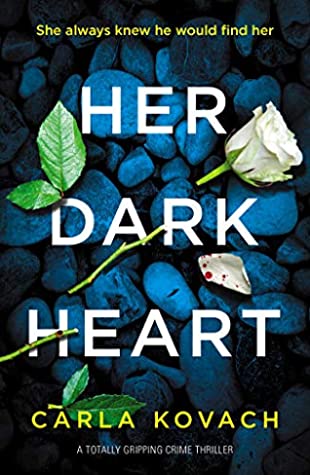 Her Dark Heart by Carla Kovach

I received a copy of this book from the publisher, Booktouture, and the author via Netgalley, in exchange for an honest review.

Susan Wheeler is late picking her son Rory up from nursery. That’s okay, she’s probably just hit traffic, or been held up with a job. Until she doesn’t come home at all. Susan Wheeler a book-keeper, mother of three, currently going through a divorce, is missing. Her sister thinks that she’s just run off again like she did when she was a teenager, her mother is beside herself with worry stating that she wouldn’t leave her children like that. When the hours turn into days, even Clare begins to worry and when mother Mary stumbles across Susan’s diary, the final entry lead the police to a body. Now Detective Inspector Gina Harte has to wonder, is Susan missing because she is in danger? Or is she on the run as a suspect?

I don’t mind a good detective story. Crime isn’t my first pick in the genre pool, but I do tend to enjoy them from time to time. I read some reviews stating that you didn’t necessarily had to have read the previous installments in the series in order to be able to catch up to where this one was, so while I normally try not to request books that are part of a series, and not the first book, I figured I’d give this one a go. It didn’t disappoint either.

I do feel that having not read the previous books in the series that I was missing some stuff. I also feel that I might have had more of an emotional connection to DI Gina Harte had I read the previous books, but it didn’t entirely take away from the story for me. It did irk me a little bit because there is constant references to past situations that Gina has gone through, and while it’s explained well enough that I know what’s going on, I just didn’t really care that much. I feel that this is something that would come with having been with the characters from the beginning, I wasn’t as emotionally invested in the personal issues that Gina was trying to work through and was just eager for things to get back to the story and disappearance of Susan Wheeler.

The story was well written and there were many twists and turns that kept me guessing. I thought I had it all figured out but boy was I wrong!! This is the first crime/detective/mystery story in a while that had me totally fooled. I didn’t even have the why part of the story worked out. Not until Kovach was ready to reveal it, so that was fantastic.

The mystery itself was incredibly gripping and I really got the feeling of a cold, dreary winter from Kovach’s writing. The narration is written from third person, however, some chapters here and there are written from the culprit’s first person point of view, which I found a little bit distracting at first, jumping between POVs, but I feel like in the end, it really worked for the story to be written this way. Kovach is definitely adept at her craft.

If you want a good detective/thriller/crime novel where the women are at the forefront, give this series a go. I know that I’m definitely keen to head back to book one of the series and see where it all began. You can read the books as stand alones if you wish, but I feel like it would be better enjoyed by reading the series in order.

*= Read book. Repeat may earn a commission from purchases made through these links.