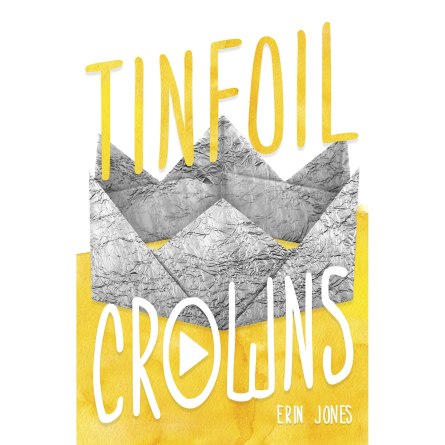 I received a copy of this book from the publisher, North Star Editions, and the author via Netgalley in exchange for an honest review.

Fit is determined to become famous. She’s already got a steady slew of followers on YouTube, but she wants more. She wants to be able to get out of the small town she lives in with her Grandfather and her brother. She simply wants more. She shares videos about her life and makes up clever raps parodying songs and videos, always sporting some accessory made out of tinfoil. The one thing she hasn’t shared with her fans is that at the age of 3 years old, her mother attempted to kill her and her baby brother, and subsequently when to prison for it. She may not be able to keep a secret much longer though, as River, Fit’s mother, is out of prison and heading to live with them in their cramped apartment. When Fit realises that she won’t be able to hide what happened forever, she attempts to fake at mending the relationship between her and her mother in an attempt to boost her popularity, but is it enough?

I was pretty excited to read this title. The blurb just really sounded fantastic and I thought that this would be an amazing story that really showed growth and went into the depths of what I assumed was post-natal depression, and the toll that it takes not only on the children, but on the mother and the relationships in her life. I was sorely disappointed though.

Don’t get me wrong, the book kept me going because I just NEEDED to know what happened next, but by the time I got to the end, I couldn’t help but think…that was it? That was the story? I honestly felt like nothing really HAPPENED. We saw the struggle of Fit coming to terms with the fact that her Grandfather didn’t hate her mother after what she did, as well as having to come to terms with the fact that her mother was coming to live with them. I couldn’t help but feel annoyed by the fact that Frankie (Fit’s younger brother) and her Grandfather were actually ANGRY at Fit for being pissed that her mother was coming to stay. I’m sorry, but if you were almost murdered at the hand of your mother, why should you be okay with it? And they didn’t try and help Fit in anyway, clearly, with her tantrum throwing and swearing and yelling and smashing, she had some severely deep seated issues that were centered around the event that happened to her at three years of age, but no one thought that maybe she should seek professional help? No one tried to address that she hadn’t dealt with anything? AND NOTHING ENDED UP BEING DONE ABOUT THIS!

Then!! We have River! So this was a beautiful opportunity for post natal psychosis and depression to be explored, we got a little bit of an insight into what happened that day and what was going through River’s head leading up to it, but I just felt like it wasn’t explored. Yes, Fit did a little bit of research but I just felt like it was a huge missed opportunity here. There was no revelation of Fit coming to terms with what happened, there was no revelation of Fit understanding exactly what had happened to River to make her do what she did. It was like nothing happened. Fit was angry, then was using River, then went back to the same old thing.

The story was intriguing because it captured the dependence of people on social media platforms and the obsession that can come of following your favourites on their socials, but it just felt so flat to me. As I said above, there just honestly did not feel like there was a reason behind the book? There was no growth in any of the characters that I could see, it’s like the loop just started again once we got to the end. This is one of only a small amount of books that I’ve read that I got to the end and just didn’t see the point in having read it at all. I feel like if the deeper issues were explored, and maybe Fit went got some mental health counselling and maybe if River actually spoke about what happened to her, it would have been so much better than what it was, I’m not saying it was outright terrible, just for me, I feel like I could have done without reading it. I just really wish that deeper things were explored here. The only reason I’m giving it a 2 star rating is because it did keep me engaged, up until that last page when I realise that NOTHING HAPPENED!!

The characters themselves were annoying, and while I know that this is a young adult title, and the characters are teenagers, they were just infuriating. Fit is the most unlikable character I think I’ve come across. She’s whiney, bratty and has such deep seated problems that she never gets help for, her friends all indulge her, and the only good character was her Grandfather, and I feel like at times I wanted to throttle him as well. There is a gender fluid character in this story for about a chapter or two, and our protagonist is actually at least bi-sexual herself, but once again, something happens and then it’s just left hanging and as though nothing happened at all. All of these amazing things that could have been explored and light could have been shed on them and they were just left to flap about in the wind like forgotten Christmas decorations.

All in all, it was a great idea but I feel like it’s execution let it down big time. An opportunity to really delve into deeper subjects was not taken and I feel that it would have made all the difference in the story as a whole

*= Read book. Repeat may earn commission from any sales made through these links.