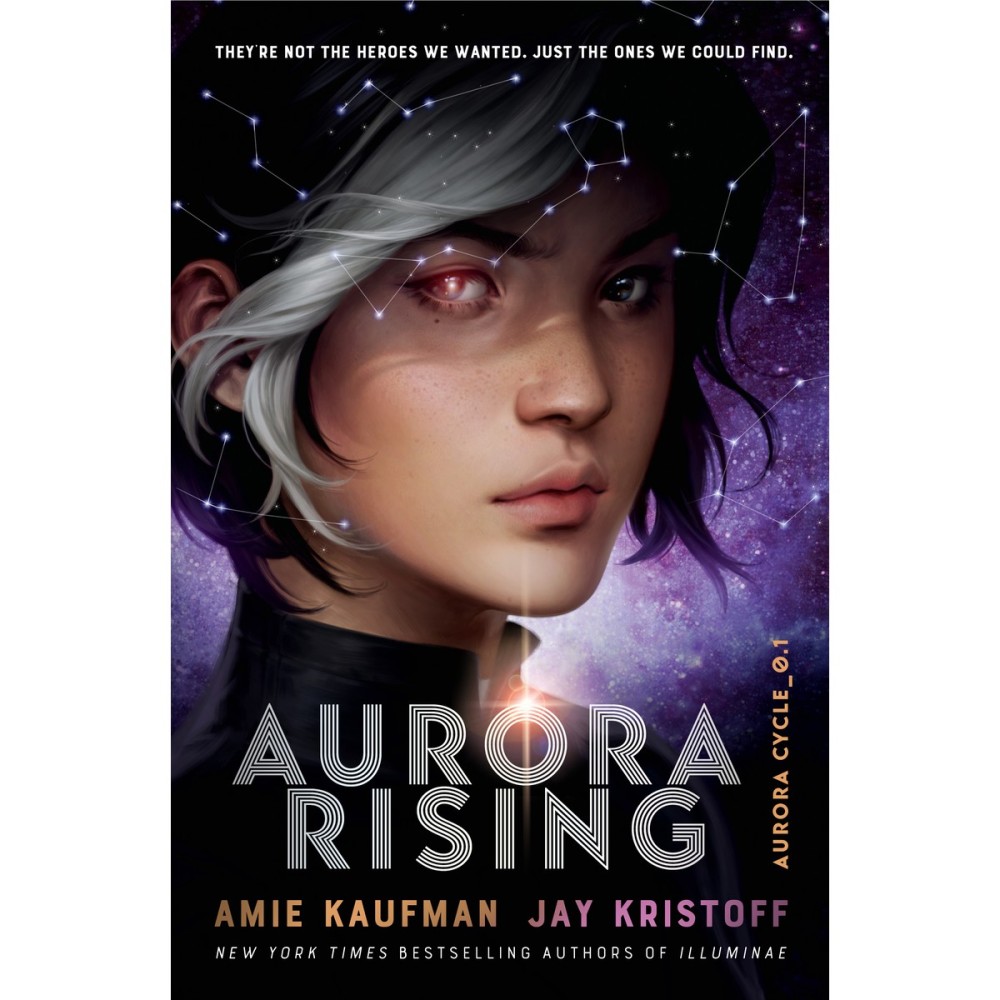 Book #1 of the Aurora Cycle series

Life is good, Tyler is one of the top Alphas at the academy and he knows that he’s going to end up with an amazing crew, he’s earned it. That is until he ends up nearly dying while answering a distress call which is coming from a ship that disappeared 200 years ago. It’s all good though, he works it out and saves the girl, though in doing so, he has missed the draft and is left with the dregs that nobody else wanted, besides his Ace – Cat, who’s been his best friend since she smashed a chair over his head when they were little, and his sister Scar, of course. This isn’t even the worst of it, after the crew disembarks on a routine deliver drop, leaving with a cryptic message from Director De Stoy and Co. this rag tag crew of misfits find themselves embroiled in something waaaay out of their scope. Planetary take-over, a heist, dealing with the lowest of the low and being chased by the GIA, oh and the stowaway on their ship, none other than Aurora O’Malley, the girl that Ty missed the draft in order to save. They aren’t prepared for what’s coming, but they’ll face it head on and try their damn best, because that’s just what those of the Aurora Legion do.

I had ummed and ahhh’d about this book for a while. I kept coming across it in book stores and the like and kept getting drawn into the beauty of the cover, but I just wasn’t sure if I’d enjoy the story. I do like science fiction and space exploration and all that fancy jazz, but I just find that sometimes, science fiction stories can be a bit dry. So when a friend finished it and absolutely adored it, calling it her read of the year, she lent it to me leaving me no choice but to get over my damn self and read the damn book. And I am SO glad that I did! I did not expect to enjoy it as much as I did, and it really was a page turner. This story kept me glued to the page, and desperate to find out what happened next. I’m talking glued-from-page-one page turner. This story drew me in hook, line and sinker and I gladly followed it down the rabbit hole.

The story itself is well written and doesn’t info dump about the world which I found great. The point of view switches between all the characters in Squad 312 which I didn’t mind as it gave a good insight into how each character was feeling at certain times and about specific decisions that were made that they may not have exactly agreed with. The story is a sci-fi space fantasy of sorts that sees Aurora, a girl who was found frozen in cryo on a ship which disappeared two hundred years ago. So it’s cool to see someone so out of place and out of the times cope with everything that has changed and happened. Obviously there are times where Aurora doesn’t deal well with life, but, come on, she’s over 200 years old and she has no clue what the hell is going on in the universe anymore. I kinda liked how the whole story is this sci-fi fantasy, but nearing the end, it almost turns into a suspenseful horror of sorts. I got definite creep factor from what was going on and I thought that this was absolutely brilliant.

The characters were good. At first glance, I thought I was absolutely going to ADORE Cat, but to be honest, I kinda wanted to kick her in the shins. I understand her feelings and what she was going through, but she could be such an abrasive bitch at times that I wanted to slap her. I’m all for colourful characters in terms of personality, I’m all for a character with a bit of snark, but for some reason, Cat just didn’t do it for me….until the last 100 pages, then I kinda came around a bit and now I’m left with this…you know what? I’m gonna stop that there before I give too much away. I love Scar, I thought she was great, and having the little backstories added about her numerous boyfriends was pretty funny. Finian pissed me off a little with his sarcastic remarks in the start because there’s a time and a place and he just didn’t always get those times and places right, but I came around in the end. Ty was a good hero but seemed a little flat at times. Kal…oh my word Kal. In case you haven’t realised this wonderful silver haired fox is my favourite character, his bluntness, his inner turmoil, his hair. I just loved everything about this character, and I’m not going to say more because it will simply end with me gushing over a fictional man…again! Aurora is a great character, with everything happening in the book, she’s written so well and she really rounds out the story, I’m not going to go into too much detail because I don’t want to give anything away accidentally.

The world building was good, the way the book was formatted was very clever as well. In between each chapter there is another page that has been written as it is a uni-glass, a super advanced iPad essentially but futuristic of course, and it can speak to you so that was cute, and it gives information about the worlds, the races, history, all that jazz. I thought that this was a super clever way to world build without overloading the reading in story too much, it tells you little bits and pieces to help round everything out.

I’ve read a few reviews that have stated how disappointed they were that at this stage, it appears as though the characters are all straight and heading into hetero pairings. While I love a good LGBTQ+ story, and the characters are generally written in such a way that I instantly adore them. I feel that it is unfair to judge a book negatively because it hasn’t included a homosexual pairing. Not every story that we read is going to have absolutely everything in it that we would like. And to be honest, Finian is definitely swinging both ways, so it is included it’s just not at the forefront of the story I guess because that’s not what this story was about. It was about a thrown together group of misfits who get thrown into something so much bigger than themselves, and we get to watch while they try and navigate everything and try not to crash and burn. Would I love it if Finian ended up with some handsome, adorable witty male, you’re damn right I would! Would I love it if Finian ended up with Scar? You’re damn right I would! I think I’m going to love the steps these characters take regardless of what it turns out to be. I’m here for a good story, awesome characters and witty humour….possibly also to get my heart ripped out of my chest and stamped on for good measure at some point too. Who these characters fall in love with is of no matter to me, like a proud, loving parent, I just want them to be happy.

All in all, I really enjoyed this book, way more than I was actually expecting to. I’m hanging for book two because while this story did wrap up so to speak, it has been left open for what’s to come in the following books and I can’t wait to see how our crew deal with it, and what trouble they get into while they do it.