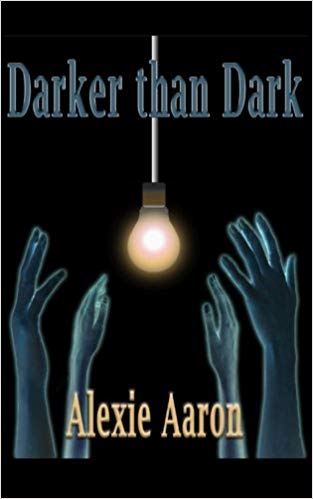 Darker than Dark by Alexie Aaron

Book #4 in the Haunted series

Gwen really hates the dark, sure, most kids do, but Gwen hates it for a different reason. Since she was a baby, night time brings the darker than darks. Strange, shadow creatures that try to force themselves into Gwen’s ears and mouth. She’s tried telling her parents, but they think she’s just having nightmares, that is, until they experience the darker than darks for themselves. This sparks Gwen’s parents to call PEEPs. The PEEPs team, along with Mia, Murphy and Angelo Michaels set out to find out what exactly these darker than darks are, and whether it has anything to do with the spirits of the Iroquois and Fox tribes from the 1650s that Murphy has seen amassing in the north woods of his land.

Darker than dark is the fourth book in Alexie Aaron’s Haunted series, I highly recommend reading this series from the beginning. While each book deals with it’s own haunting ghost story, there are things that carry over from the previous books. Mostly, the character relationships and their evolution, I feel that without reading the books from the beginning, you’ll miss a lot of that and to me, it’s pretty important. These aren’t just ghost stories, yes it has that massive element to it, and let’s be honest, they are they main part of the story. However, I’ve found this series to have fantastic character development and the character relationships are written so well. Some people may get annoyed with how much ‘screen time’ the relationship aspect gets when this is meant to be a damn ghost story, but I quite enjoy it. It gives this world more depth to have believable characters and their relationship dramas worked through. I find it makes me have stronger connections with the characters when they’re being written as real people rather than just a two dimensional cardboard cut out that is there purely to carry the plot.

We all know that I love a good ghost story. And I’m yet to read one of Aaron’s that I don’t like. This one at first felt like it was moving a little slow, but it soon picked up the pace and I fell into the rhythm that I had with the previous books.

I loved the way this story went, and how it included the Native American tribes ghosts. I’ve had an absolute love for the Native American culture since I was young (I thank my grandmother for this), so I thought it was a nice little added touch that made me love the story that bit more.

I love how far the characters have come from that very first book, I can see so much growth in them all, as well as some….un-growth? if that makes sense? Things started to go a little funny in the last book between Beth, the PEEPs researcher, and Mia, who is the PEEPs sensitive. So to see that relationship unravel was a little sad, but I found myself actually liking the way it was going. I was beginning to get real sick of Beth’s shit in the last book, and trust me, it gets worse in this one, so I was pretty excited to see where it would head in this instalment.

There’s not a whole lot I can say about this one, I find that as a series goes on, I end up repeating myself because the author’s writing very rarely changes. All I can say is, I really enjoy this series. It’s light, easy to read, fun and Aaron writes a good ghost story.