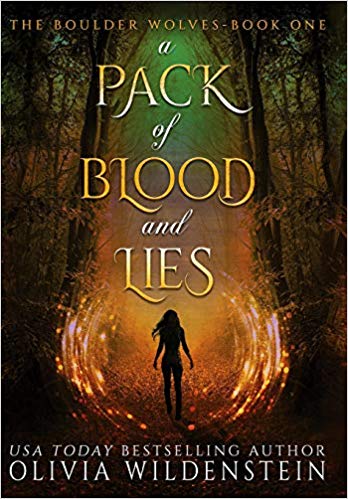 A Pack of Blood and Lies by Olivia Wildenstein

I received a copy of this book from the publisher, Twig Publishing, and the author via netgalley in exchange for an honest review.

Ness Clark is doing okay for herself, she’s got a stable job and she has a woman who cares for her so deeply, that it almost fills the hole her mother left behind when she passed away. All of this is thrown to the wind however when she returns home one night after work to find her Aunty, Uncle and cousin waiting for her. She has to return to Colorado. Namely, Boulder. Which means, that she has to return to the pack. She’s three months away from turning 18 and being classified as an adult, she almost made it, but now she’s forced to go back to the life that she wanted to forget about. She’s the only female werewolf the all male Boulder pack, and it’s not something she’s forgotten. When she finds out that the former Alpha, and the main reason her and her mother fled, has died, she realises that she has a chance here. A chance to get out from under the shadow of the pack, out of the shadow of the men, and really show them what she’s made of. All she has to do is survive the trials…

I have had this book sitting in my TBR pile for SO long, I have absolutely no idea why I haven’t read it until now because this is my jam. I absolutely ADORE urban fantasy, and I also have a massive fondness for werewolf stories. I’m so mad at myself for waiting so long to read this, it pleasantly surprised me and I’m left wanting to buy up the following two books in the series because I need to know what happens!! Don’t get me wrong, the story is not left on a cliffhanger, but there is a story arc that I believe will go over a couple of books, the main plot in this book is all wound up by the end, so you’re not left cursing the author for making you need to rush out and get the next book now.

The characters were absolutely fantastic. I loved Ness’ character so much. Yes she’s got a chip on her shoulder, but after we learn a bit about what she’s been through, we can definitely understand why. She’s not the normal grating seventeen year old that I find in a lot of other stories, and she definitely doesn’t come across as a teenager. The whole book I totally forgot that I was reading about young adults, and not people in their mid twenties, which I actually really liked, I found it refreshing. Ness is hard arse, and yes, she probably should learn to trust people a little bit more, but as I said above, you can completely sympathise with why she has these trust issues and why she thinks everyone is out for themselves. Evelyn was such a wonderful character that warmed my heart, I absolutely loved her and I sincerely hope that we’ll be continuing to see her throughout the remainder of the series. The boys…oh the boys. Some were good, some I wanted to punch in the throat, and some I wanted to drop off a cliff. What I liked about their dynamic was the fact that, even though Ness isn’t technically part of the Boulder pack, they protected her like she was. These are boys that she’s going up against in order to be Alpha, yet they still protected her, whether it was on Liam’s call or their own, who knows, either way, it was a nice little addition and I really enjoyed it. Don’t get me wrong, I’m not a fan of damsels in distress, and Ness is not one in the slightest, but I do like it when others can see that shit is going sideways, and regardless of how they feel about the person, they’ll jump in and help. Each character had their own distinct voices and personalities which was great, because there’s a few characters that we get to meet in this story.

The story line was well thought out and executed. I loved the backstory, I loved the trials, and the tribulations that Ness had to go through, not just in the trials themselves, but in her actual life. There was a lot of things she had to work through and had to get past in order to grow as a person, so there’s more depth to the story than a bunch of Alpha males trying to fob off the female because she has a vagina which is nice. I also loved that there was a touch of a mystery in this story as well, I love a good mystery and this one I did not see that revelation coming until it was right upon me. It made me go “Holy shit!” so that’s a big bonus here.

This story also deals with the inequality that a lot of women still face in general life. Sure, it’s put in a context of werewolves, but it’s still relevant which I thought was great. It goes through the thoughts and feelings that I know myself as a female has had, and I’m sure many other females have had as well. It’s tough when no one takes you seriously.

All in all, this was a pleasantly surprising book and I absolutely cannot wait until I get my hands on the next one!