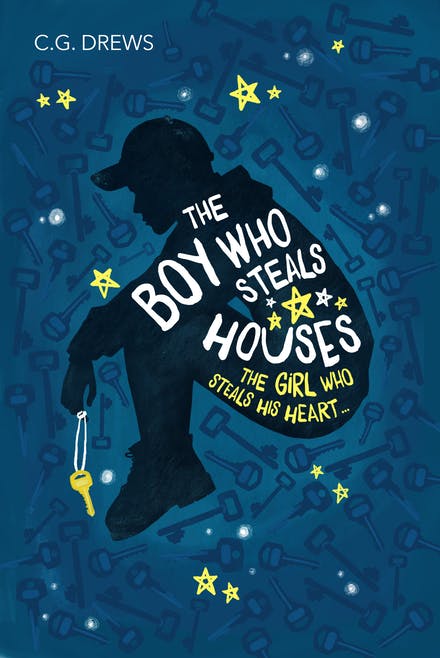 The Boy Who Steals Houses by C.G. Drews

Sam steals houses. It’s not as dastardly as it sounds. Him and his older brother Avery don’t have a place to live, a place to call home. So Sam does his best at taking care of them both by doing what he’s good at. He cases houses and if he can tell that they’re empty, generally because a family has gone on vacation, he’ll break in, stay a couple of days, then move on. It’s not as bad as you think. You’re probably wondering, why is it Sam’s job to look after them both? Avery is the oldest after all. There’s one slight difference in this brotherly relationship, Avery is autistic. So sometimes he can’t handle things like other people, and sometimes he gets overwhelmed and Sam’s the only one who can calm him down. So you see? It’s up to Sam to take care of them both because Avery needs him. But when a routine house steal goes sideways, as in, the family comes home when Sam’s still in the house, things take a turn for the unusual. Sam inserts himself into this family and they don’t bat an eyelid at him, and it’s now that Sam realises, he needs Avery as much as Avery needs him. Finding himself torn between wanting a home, and a family like the De Lainey’s and by being there for Avery while he’s trying to be the big brother, Sam is at a loss. He can’t tell the truth because then he’ll go to jail for what happened a year earlier, and after all Avery needs him…doesn’t he?

When I saw that Drews had dropped another book, I just about squeeed myself to death while nearly wetting my pants. After being absolutely blown away by A Thousand Perfect Notes I could not wait to get my hungry little hands on this one. I just KNEW that it would tug at my heartstrings and make me have ALL of the feels, and it did just that.

Sam and Avery have been living on the streets for the past year. Their Aunt Karen refuses to have Sam in the house after that thing he did and if he so much as puts a pinky in her door she’s going to call the cops, so he leaves. And because Avery needs to be where Sam is, he goes too. Sam is trying his hardest to take care of them both, but he’s only fifteen, and he’s doing his damned best, even though it’s not good enough. Avery can’t handle the constant change, he needs routine so he generally doesn’t follow Sam when he’s stealing houses, he stays either in the back of the mechanic’s shop where he works, or at a friends place (who Sam doesn’t like because of the booze and whatever else they get Avery into). Avery turns up just as Sam is about to pick a lock on a house, causing him to have to abandon the house and look for another. He ends up in the De Lainey’s house and they’re not due back for a couple of days, so Sam can rest easy, especially seeing as he’s caught a cold and feels like shit. When he wakes up however, he can hear the cacophony that is the De Lainey’s and he just about dies. Funnily enough, this family with a plethora of children don’t even realise when he is slotted into their daily routine. It makes him yearn for something that him and Avery never had. Safety. A loving family. A home.

This story really tugged at my heartstrings. You have Avery who is just trying to live his life and do right by Sam, because it’s always him and Sam, and they’ll be together for ever. Plus, he’s the big brother. Drews does absolute magic with the portrayal of Avery that just makes me feel all of the things. I’ve never known anyone with autism. I’ve known OF people, family of friends, or friends of friends who are autistic, but I’ve never had a first hand experience of it. So to be able to walk away from this book with a much bigger understanding of the condition than I had when I went in, really is something. But it’s not just Avery who has trouble, it’s Sam too.

Sam is toted as being the “normal” one, and I use the term loosely because really, what is normal? He’s the regular Joe. He’s the carer, he makes sure that Avery is okay. But underneath all of that, a picture is painted of a boy, because that’s what he is, a boy, who has been abused, and neglected and has developed serious anger management problems from the need to protect Avery and fix everything. He’s been the one that Avery can depend on, can lean on. But Sam doesn’t lean on anyone. He flies off the handle at the drop of a hat and he breaks into houses because he just wants somewhere safe and warm to sleep for the night. This boy has issues, and he needs help and it just absolutely broke my heart when he realised that even though the De Lainey’s weren’t perfect like he originally thought they were, because let’s face it, no family is perfect, even though they weren’t perfect, he still wanted to be a part of this crazy, loud, out of control family. He could see the love, and the safety they shared, as well as the heartache, and he wanted all of it. I just wanted to reach into that book and give Sam and Avery the biggest hugs in the world. Because these boys just wanted to be loved, and to be warm and safe and they were denied that.

This book does deal with abuse, neglect, autism, but it also deals with growth and love and pushing through the hard stuff. I got a little teary near the end. And when you read it you’ll see why. I do wish there was more to the story, though I can understand why Drews left it open to interpretation. I just wish I knew that these boys were okay. I just really need to know haha.

All in all, I highly recommend this book. While I didn’t enjoy AS much as ATPN, it was pretty damn close to it. I did find it odd that in the blurb, it is said that the De Lainey’s take Sam under their wing, when nothing really is brought to light until halfway through, but I guess I can kinda see where the blurb was going with that comment. If you want a book that gives you all of the feels, is a little bit hallmark movie, and well written, jump on in, you won’t regret it!