So in this post I wanted to do something a little different.

Last night, I watched the movie Annihilation for the first time. 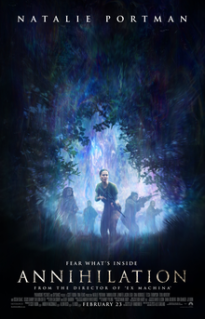 For those who don’t know, this movie is actually based on a trilogy of books by Jeff VanderMeer called ‘The Southern Reach Trilogy’, which consists of: Annihilation, Authority, and Acceptance, in that order.

I first read these books over a year ago and they intrigued me SO much. The whole premise of the story is that The Southern Reach is a research center based a short distance away from a place dubbed Area X. Area X is the main mystery here, where did it come from? What caused it? What is happening inside of it? The southern reach have sent various teams inside Area X to hopefully gain some insight into the questions asked above. The problem being, the teams don’t always come back, and when they do, they are generally struck down by numerous health issues that end up killing them. The first book, Annihilation, follows the twelfth expedition into Area X, this a team of four women, an anthropologist, a surveyor, a psychologist, and a biologist. The story is told from the point of view of the biologist. It follows their expedition and their findings in a suspenseful story that is very slow burn. One thing that I noticed straight of the bat with this story is, the characters don’t have names. They are simply known by their occupation. I found this to be one of the best parts of this story as it showed (to me) that the story wasn’t based around the characters, their personalities, or really much about their personal lives at all. It was mostly based around Area X and what is happening inside, and what happens to our nameless characters.

So because I’d read the books, I was pretty reluctant to watch the movie, I’m not generally a fan of book to movie adaptations purely because a movie cannot always capture the book, and I understand that it is pretty impossible for a movie to be exactly like the book, so I just choose to avoid them. Sometimes though, my curiosity gets the better of me, like it did here. I must say, I am SO glad that I watched this movie.

The movie seems to have enveloped the whole trilogy, from what I could tell. It’s taken parts out of all three books to be able to make a single movie that makes sense (somewhat) and is complete without the long dragged out procedure of waiting years for a conclusion. I noticed at the start that one of the main plot points from book 3 actually shows up at the start of the movie, which I found interesting. Obviously the characters have names, I think it would be difficult to write a screenplay and not have your characters named, I found this also gave the characters backgrounds, depth and made them appear more human, which in turn made you care about what happened to them. There were a few changes which I found interesting, but I also found, that they actually worked. The bear that was added in was a nice touch, I love the way that they executed this. It was creepy and well done. I am a little disappointed about a couple of missing things, but over all, the movie worked really well.

If you’ve read the books, I suggest going into the movie with an open mind and try not to compare it to the books at all, if you look at it as an individual movie not based on anything, it’s great! I reckon that I will definitely be watching it again, I like to analyse movies and books, so I feel that this one is right up my alley. If you’ve seen the movie and are interested in checking out the books, definitely think of them as a totally different thing, try not to compare the movie to the books or you will get bored, fast. As I stated earlier, this trilogy was extremely slow burning, it’s not fast paced at all, and at the end I still had questions that weren’t answered.

Overall, I suggest giving both the movie and the books a go. If possible, read the books first, but if not, keep that mind open!